You are here: News > Project success through team spirit:... 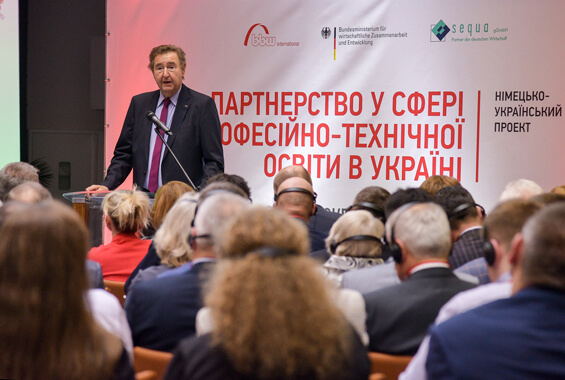 "But what is really special about our vocational training partnership is what all participants were enthusiastic about from the start: the team spirit. It ensured that many goals were not only achieved but in some cases even exceeded." (Prof. Goth in his speech)

During the three project years, two new professions were developed to meet the needs of local companies. Both the "machine and plant operator" and the "electric gas welder" are professions in high demand in both regions.

In more than 20 seminars, around 120 multipliers (teachers, company trainers, representatives of schools, authorities and companies) were trained in topics such as methodology, didactics, marketing of vocational training and also in specialist topics. To date, around 100 trainees have successfully completed the new training courses in a total of eight pilot classes and have been able to conclude good employment contracts almost without exception.

Ukraine, the largest country in Europe in terms of surface area with around 46 million inhabitants, is undergoing major upheavals. Decades of membership in the Soviet Russian have left their mark on legislation, administration, infrastructure and the economy. One of these is the previous system of vocational training which was centrally controlled and predominantly implemented at school. After the declaration of independence and the increasing orientation towards Europe, the demand on the part of companies for qualified employees with a practical orientation increased continuously. At the same time, confidence in the outdated vocational training system which could hardly respond to the needs of the economy declined.

Of course the individual perspectives and opportunities created in Ukraine should also counteract the massive migration of young Ukrainian talents.