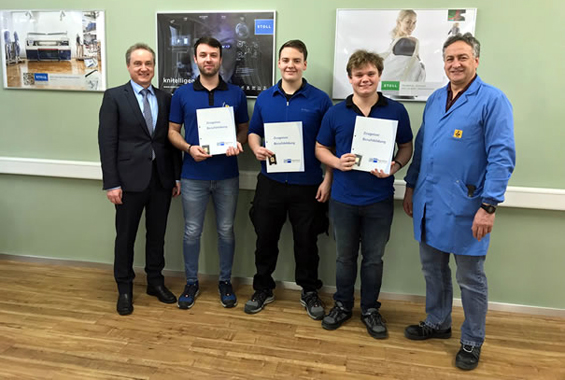 Proud of what has been achieved: Vedran Maglica (2nd from left) with his German apprentices, the training manager Mr. Kuftner and the managing director of Stoll Electronics GmbH, Mr. Zistler.

"An enormous challenge for everyone was the lack of language skills. This applied not only for the trainees from abroad but also for everyone else involved. Important keys to success were therefore the German courses offered and of course our project coaches who sometimes had to comfort homesickness as well," reports Janine Mayr, project manager.

Vedran Maglica, Croatian graduate from Cham was one of this year's graduates and said: "I can say it wasn't easy. Especially at the beginning with the language. Last almost two months was totally stressful, but now it's all over. I accomplished everything. I'm staying in Germany and I want to develop myself."

Vedran is now a trained electronics technician for devices and systems and was directly taken over by his training company Stoll Electronics GmbH.

Particularly pleasing: All other graduates of this year have already signed a contract as specialists in the training company and will thus remain in Germany for a longer period of time. This brings the total number of 92 trainees who remained in Germany after graduation to 86%.